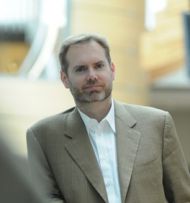 My research program is firmly entrenched in cancer genomics to understand the mutational landscape of cancer. The goal of this is to help understand the diversity of oncogenic driving events that accrue and give rise to cancer and ensure its progression. The computational detection and study of the oncogenic events should also provide an understanding of how the disease might be mitigated and therapeutics might be targeted – either by more precisely aligning known therapeutics with the observed mutational profile or by using the mutational information to help identify novel therapeutic targets. My laboratory has been extensively analyzing data next-generation to achieve these goals and have developed a number of computational approaches and methodologies to this end.

A significant part of my research program is to determine within specific cancers how the specific oncogenic profile with a individual cancer might be innovatively exploited. One example is in Lymphoma, where mutations in either MLL2 or EZH2 are found in the majority of patient samples and it is now apparent that modifications in epigenetic programming are a key aspect of this disease. Within my research program, we have identified a number of epigenetic target that have the potential to be modulated in such a way as to reverse the effects of the oncogenic mutations in EZH2 and MLL2. We have been using computational approaches, such as molecular docking and molecular dynamics to identify and refine compounds that can modify the epigenetic program. This is research area is also complimentary to my laboratory’s other role as a data analysis centre for the Canadian Epigenetics, Environment and Health Research Consortium (CEEHRC).

In 2005 Steven Jones was identified as one of Canada’s top 40 professionals under 40 by Caldwell Partners International as well as by Business in Vancouver. He also received the Spencer Award for IT innovation as well as the 2007 Medical Genetics teaching award for UBC. Further contributions include his involvement as the founding director of the CIHR/MSFHR Bioinformatics Training Program as well as director of the University of British Columbia Bioinformatics Graduate Program. In 2011 he was inducted as a Fellow of the Royal Society of Canada for his contributions to Genomics and Bioinformatics. In 2012, Dr Jones was a recipient of the prestigious UBC Killam teaching prize in recognition of his contributions to graduate bioinformatic education. In May of 2014 Dr. Jones was awarded the Distinguished Achievement Award by the Faculty of Medicine at UBC and in June 2014 he became a Fellow of the Canadian Academy of Health Sciences.

Am I automatically accepted into the program if I apply on-line through the Faculty of Graduate Studies (G+PS) and select your program?