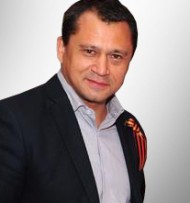 Dr. Cherkasov is an Associate Professor in the Department of Urologic Sciences at the University of British Columbia. Initially appointed to the Infectious Diseases Division at the UBC Faculty of Medicine in 2003, he was recruited as a Senior Scientist to The Prostate Centre to develop and apply his expertise in bioinformatics tools to drug design, molecular modeling, and bioinformatics.

He received undergraduate and graduate training in chemistry from Kazan University (Russia). Dr. Cherkasov obtained his Ph.D. in 1996 and in 2001 he also received the Doctor of Science degree from the Russian Academy of Sciences which is the highest scientific merit for scientists from Russia and is awarded only to the most distinguished and established researchers.

From 1998 until 2000, Dr. Cherkasov held postdoctoral positions in the Royal Institute of Technology in Stockholm, Sweden, and University of Saskatchewan, Canada. In 2001 he joined the BC Cancer Research Centre¹s BC Genome Sciences Centre as a Research Associate.

Dr. Cherkasov¹s research interests include computer-aided drug design, applications of artificial intelligence in structure-activity modeling for bioactive substances, development large-scale bioinformatics and genomics tools and molecular modeling techniques. He is the author of more than 100 scientific articles in peer reviewed journals, conference proceedings and patents. Dr. Cherkasov is a core Faculty of the CIHR/MSFHR Strategic Training Program in Bioinformatics and has an Adjunct Professor Appointment at the Computer Science Department of Simon Fraser University.

In 2002 Dr. Cherkasov was involved in establishing the US biotech Company APT Therapeutics Inc. (St.Louis, MO) that was focused on the development of new bioinformatics, cheminformatics and proteomics tools and therapeutic products. In 2003-2004 the Company was listed among the 10 top biotech companies in the St. Louis area (St.Louis Business Journal). among such world recognized leaders as Sigma-Aldrich. Currently Dr. Cherkasov serves on the Scientific Advisory Board of several local biotech startups.

How can I improve my qualifications and perhaps gain admission to your program?